By 2025, Oregon’s population is projected to grow twenty-eight percent, adding nearly one million people to the state. As population expands, changes in demographic variables such as income, age structure and employment will influence the nature of future water use in Oregon by expanding claims for water in industrial, municipal and recreational sectors. Independent of population growth, increased claims for in-stream water needs, associated with the implementation of state and federal environmental laws, will further heighten competition for limited supplies. Without strategies to anticipate and address competing water demands, Oregon’s water management stakeholders run the risk of allocating financial, technical, and legal resources inefficiently. Without successful strategies, conflicts over water resources may become more frequent and stalwart as the state’s population grows.

Information accessibility is a critical component to appropriately allocate resources, to understand long term balances of supply and demand and to understand conflict. Action needs to be taken to adapt available data from multiple sources to create datasets that will help facilitate informed water management decisions. Compiled and available within this web site are several datasets pertinent to understanding water demand in Oregon. Each is divided into administrative basins, the Oregon Water Resources Department's management unit. This consistent, basin scale format is essential for analytical purposes.

Three categories of datasets were compiled to gain an understanding of water resources in Oregon. The maps of these data are available in the Oregon Map and Image Gallery.

The research described in more detail below cummlinated in OSU Graduate Kristel Fesler's Master Thesis titled An analysis of water resource conflict and cooperation in Oregon between 1990 and 2004 ; it is available on OSU's Scholar's Archive. 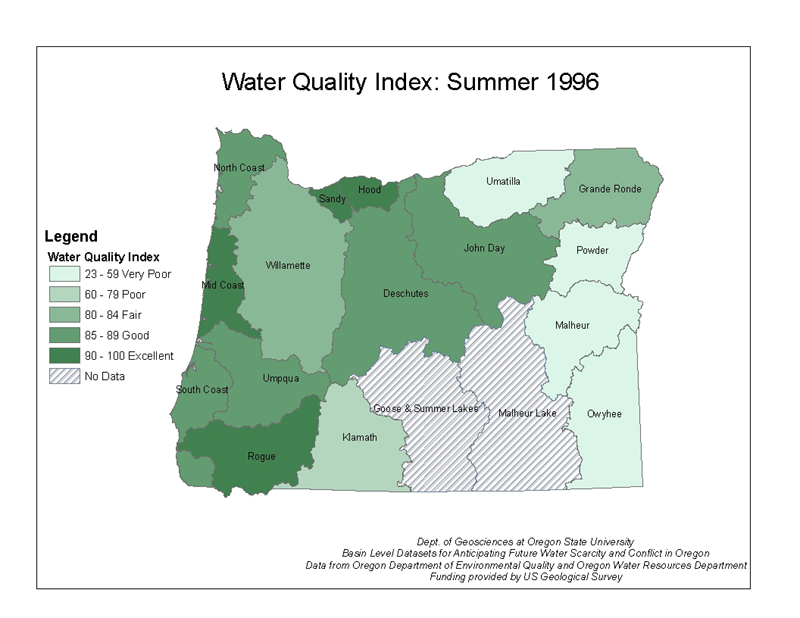 To represent the both qualitative and quantitative physical factors that impact water availability over time, three indices were created for the basins. Given constraints in time and resources, best approximate values of the physical water situation, not actual volumes, were developed. These proxy values can be used as relative indicators of trends in water quality and quantity.

Drought Index- A drought index was created to represent the variation in water availability for each basin during the water year. It aggregates several variables that impact the amount of water physically available in the system before human use. The values for each basin are created independently of each other, thus the information does not show that Oregon's eastern basins are drier than the western, but shows how dry a basin is that year compared to the basin's average.

Consumptive Use Index- This is a measure of how much water in a basin is dedicated to consumptive uses relative to the amount available in the stream. In other words, it approximates an instream flow amount and an amount diverted for various uses. Oregon regulations require that a river system total diversions cannot be higher than the 80% exceedance flow (the total flow that is exceeded 80% of the time).

In order to complete the picture of the picture of Oregon's geography, information was gathered on population and related social and economic variable. This work was completed by the Population Research Center at Portland State University.

A variety of demographic data is available for both 1990 and 2000 and is listed below, maps of the data are available in the Oregon Map and Image Gallery:

Traditionally water resource studies involve either the physical or social aspect and when studied together a case study is the general format. However, it may be that the most valuable lessons occur when studied in combination over larger time frames and spatial scales. As such, hydropolitical data is becoming more recognized as an integral part of water resources studies. Also, demographic or physical variables are often attributed to cause resource conflict and this dataset series was created to test that idea, to convey the entire scope of possible interactions and to locate them in space over a longer time. Due to the various uses of, and many stakeholders interested in, water resources the range of possible social interactions is quite large and only three different datasets were compiled. Maps are available in the Oregon Map and Image Gallery. 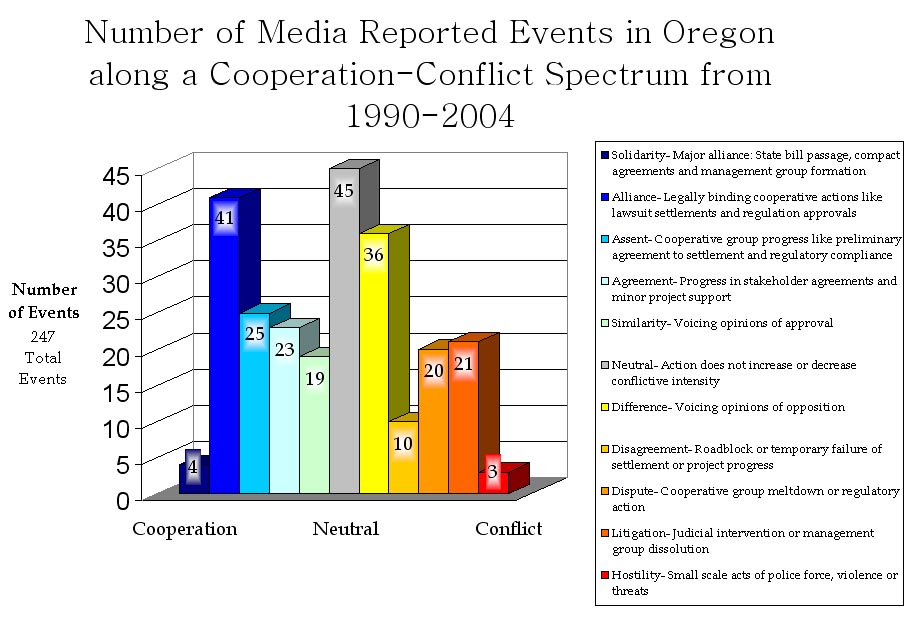 News Events - This excel spreadsheet contains summaries of newspaper articles from 1990-2004. The database classifies the events into a conflict-cooperation intensity spectrum, locates the event into a administrative basin and assigns an issue type to group interactions within the same topic.

Legal Cases- Oregon state and Federal court records were complied to understand aspects of social interactions over water resources. The court of jurisdiction, issue and parties are provided in an excel spreadsheet.

Regulatory Actions- The Oregon Water Resources Board maintains records of water rights violations called Surface Water Summaries. The cumbersome format and alteration of the district boundaries made this a limited resource and complete data is only organized for the years 2000-2002.